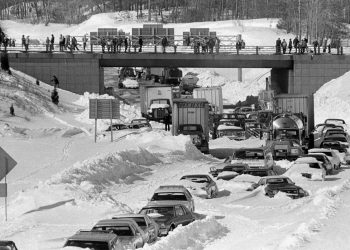 Of all fears I have when it comes to survival, it is losing all power in the middle of a cold and snowy winter.  I have survived many a Blackout and many a Nor’Easter having lived in New York and New England most of my life.

The blizzard of 1978 was probably one of the worst storms Jeff and I can remember in East Coast History.  Jeff was working on the fire department in Uxbridge Mass.  Rescue and Fire Crews were searching for a missing ten year old boy.  I was making my way home in the Bronx via the NY Subway system (wearing high heels of course).

A record 28 inches of snow hit the NY, NJ, and New England area falling at a rate of 2 inches a minute. The storm killed over 50 people in the Northeast and injured around 4,500.

Sean Munger, an author and historian, describes the storm on his site seanmunger.com.  (check out his site, Sean has a background in historic climate change and has written some cool and bizarre fiction novels).

“The storm began as a cyclone off the coast of South Carolina the previous day, Sunday, February 5. Weather forecasters predicted there would be heavy snow during the night and the early hours of Monday. Unfortunately, as it turned out, the snow was a little late. Not much had fallen by morning rush hour in New England on February 6, so many people shrugged off the prediction and went to work as always.

Then it began dumping. With schools and businesses open, everybody was now concerned with getting home before conditions got too bad.

By afternoon it was “too bad.” Snow in some places, especially Rhode Island, was falling at a rate of two inches an hour. Highways ground to a halt, as did commuter trains. Some people caught on the roads suffocated in their cars because the snowdrifts blocked their vehicles’ tailpipes. Others abandoned their cars and hiked out through waist-deep drifts, leaving their cars to be buried under tons of snow.

At Boston Garden, fans who came out for a college hockey game found themselves stranded in the arena when the game was over. Some stayed, trapped indoors, for several days, camping in their seats and doing their best to cope with overloaded bathrooms.”

As of nightfall on February 6, almost all of New England, plus Long Island and New York City, was at a standstill. Mail delivery was interrupted for the first time in 40 years. The New York City schools closed, an exceedingly rare occurrence (most students and employees can get to New York schools via subways).

Because the storm happened during a new moon, tides were abnormally high, washing out thousands of houses in Massachusetts and along Long Island.

Even in Northeastern cities used to snow, infrastructure couldn’t cope. Snowplows couldn’t keep up. Ambulances and basic service vehicles couldn’t move. In Boston some people were taken to hospitals by snowmobile. People who were trapped at work on Monday and couldn’t get home ended up spending days in their offices, waiting for things to return to normal.

Of course there were casualties of the Blizzard of ’78. In addition to those who died of exposure–often the poor or homeless who didn’t get to shelter in time–people were killed by collapsing power lines, and there was more than one death in Rhode Island caused by heart attack while shoveling snow.

A 10-year-old boy who went missing during the storm in Uxbridge, Massachusetts wasn’t found until three weeks later; he was buried under snow just feet from his front door” (The 10-year old boy Sean mentions here is the little boy Jeff and the fire crews tryed desparately to find, Peter Gosselin.  He knew the family, and remembers vividly when they found him.  To this day, he still sheds a tear when he talks about it). .

“All told, 54 people died in the storm or somehow related to it. Elected officials who were in office at the time, including future Presidential nominee Michael Dukakis, then Governor of Massachusetts, remembered it as one of the largest crises they ever handled in their careers.”

So what can you do when you are without power in a situation that you know will be many days before it will be restored.  First of all, don’t wait for it to happen.  Losing electricity can happen in summer, spring, winter and fall.  Rather than relying on traditional gas and diesel powered generators that are smelly, dangerous and noisy, why not think about clean, quiet, solar power.

I know of one solar powered generator that I wish had that winter. The Patriot Power Generator can generate up to 1500 continuous watts of solar power.  That’s enough to power lights, a TV, small electric heaters (don’t forget to pick up a few at a Home Depot, a Lowes or a Walmart) and life saving medical devices.  Something to think about.  It is an investment, but one that will last for as long as you take care of it.  It is also portable so you can take it anywhere you go.

Watch the video for more information. 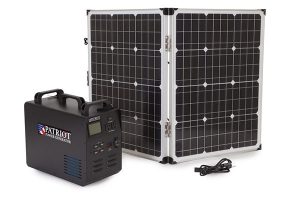